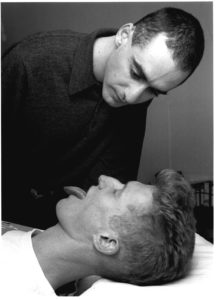 Getting into writing was an act of madness. Perhaps conceit. Perhaps when you’re young, you don’t really understand consequences. At any rate, I was like British comedienne Katherine Tate’s character who says, “I can do that!”, when she clearly can’t.

I guess it was around 1989, a year or so after graduating,  I read a review of a French acupuncture book in the Journal of Chinese Medicine. The reviewer praised the book and thought how great it would be if it could be translated into English. And I thought, “I can do that!” and wrote to the publishers.

I had been OK at French at school and I’d gone on to study it at university. But at that time, I was too troubled to continue and I dropped out of my uni after a year. So thinking that a university drop out who hadn’t spoken French in five years could translate a book was really an act of ”hutzpah”. But when you’re young, you take risks! I wrote to the publishers….

To cut a long story short, I got the gig!  I spent a year with a dictionary, badgering a friend who was good at editing and torturing a colleague in my clinic who happened to be French. I kept going,  until the book was done. Without their help, I could never have succeeded.

The reviewer was correct. Acupuncture and Moxibustion: A Guide to Clinical Practice is a brilliant book and i still refer to it today. It has been very influential in the West.

So this madcap project was my springboard into writing, editing and publishing and its success laid the foundations for many of my future projects. So today, I’d like to say thank you to Churchill Livingstone, who trusted me, Ruth and Martine, who helped me and Bernard Auteroche, who inspired me. Milles mercis!